The parent company Swedencare AB (publ) is responsible for the strategy, business planning and management. This is done by the control of trademarks and patents, sales rights, cooperation agreements and as parent company of the subsidiaries. The Company and headquarter is located at Medeon Science Park in Malmö, Sweden.

Swedencare owns 100% of the shares to all subsidiaries/sales companies which are responsible for the sales and marketing for its individual regions. The subsidiaries provide a monthly financial report as well as a sales progress to Swedencare. The group also have a common ERP-system where orders and invoices are registered. The system enables an effective production planning at the same time as the subsidiaries can track the order progress. Through the local market knowledge of the subsidiaries, the marketing can be customized and the local customer preferences and new products can easily and effectively be identified. The subsidiaries are located and managed in Greece, Spain, France, Great Britain, Ireland, Sweden and the US.

The Board of Directors are responsible for the Company’s strategic and financial targets and, together with the management, for the strategic planning. In the BoD, there is an extensive experience of international sales and marketing as well as a wide international network. The Managing Director and CFO are responsible to provide a business plan in line with the BoDs strategic and financial targets. They are also responsible for financial planning, and questions and communication with the stock exchange. The CEO of the Company, together with the managing directors of the subsidiaries, is a management team responsible for product development as well as sales and marketing. 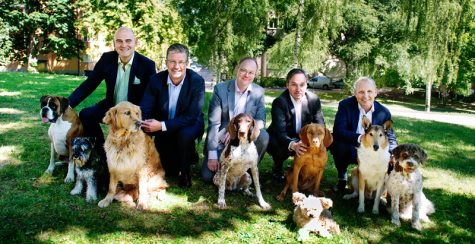 •  Background from the financial sector, among others SEB, Aragon Fondkommission, CFO at Adera AB 1998-2001 (Addnode AB), as well as several Board assignments. Bachelor of economics from Örebro Högskola.

•  Managing Director and member of the board at Per Malmström Consulting AB. President of the board in K3 Nordic AB, K3 Travel AB, SVANBERG & CO INVEST AB, Creative Tools, Northway Partners, Deligate AB.

•  Entrepreneur and owner to several companies within sales, IT and property management. Degree in Market economy from Nercia Business School.

•  Advisor to Patricia AB (Investor AB) and former Managing Director of Investor Growth Capital in Europe.
Extensive experience of investments and business development within the healthcare market.
•  Chairman of the Board of Sedana Medical AB (publ).

•  Entrepreneur and owner to several companies within IT, travel and finance. Master in Philosophy from Örebro University.

*  Own or related holdings of shares and other financial instruments in Swedencare. Holding by December 31, 2020.

Jenny has been employed since 2017 and holds the leading position since 2017. She has a long international background as CFO and previously as, among other functions Financial Controller
and auditor of global groups, both privately owned as owned by private equity. Jenny has a Bachelor of Science Management from Florida Atlantic University. Board member of USWE.

•  Over 25 years of experience in the animal health industry. Founder and MD of Animal Pharmaceuticals since 2003.
Degree from Florida Atlantic University.

•  Over 10 years of experience in Internet Marketing and eCommerce. Founder and MD of Holden2 since 2011.
Degree in Management Information Systems from Loras College.

No other assignments.
Number of Shares in Swedencare:  299 600 shares.

•  Over 20 years of experience in the Oral health industry as Sales Manager at TePe and Colgate and development manager at CTS dental.
HND Business & Finance from Teesside University.

No other assignments.
Number of Shares in Swedencare:  418 515 shares.

•  Over 20 years experience as a founder, COO, and CEO of multiple successful animal health companies based in the United States.
Prior to Animal Health, Brian worked in Operations Management for the Tampa Bay Buccaneers of the National Football League (NFL).
Bachelor of Science in Multi-National Business Operations from the Florida State University.

No other assignments.
Number of Shares in Swedencare:  325 000shares.

•  Background as manager of Biovet and experience in the pet and veterinary markets.
Physics Degree and Master’s Degree in Electronic Telecommunication of Technology.

No other assignments.
Number of Shares in Swedencare:  156 790 shares.

•  Entrepreneurial background across various sectors. Expertise in building brands with a keen eye for detail
particularly in product development, sales & marketing.
Founded Nutravet in 2008, which has grown to be the number 1 vet exclusive nutraceutical brand in the UK.

No other assignments.
Number of Shares in Swedencare: 1 400 000 shares.

•  An international background of international business, marketing and communication at the latest from the animal health company Laboratorios Calier. Master’s degree in Marketing, Communication & Digital Publicity from UOC University in Barcelona and Inesdi Digital Business School.

No other assignments.
Number of Shares in Swedencare:  -.

•  Background as a department manager and from the marketing department on TT-line.
Associate Degree.

No other assignments.
Number of Shares in Swedencare:  -.

§ 2 REGISTERED OFFICE
The registered head office of the company is in the municipality of Malmö.

§ 3 OBJECTS OF THE COMPANY
The company objective is, directly or indirectly, the development, manufacture and sale of products within the area of animal healthcare and preventive dental care and other business compatible therewith.

§ 6 FINANCIAL YEAR
The company’s financial year shall be the calendar year.

§ 8 AUDITOR
For audit of the company’s annual report, the accounts and the administration of the board of directors and managing director, not less than one auditor and not more than two auditors with or without deputy auditors shall be elected.

The following matters shall be addressed at the Annual General Meeting:

1. Election of a chairman at the meeting;

4. Approval of the agenda;

5. Determination of whether the meeting was duly convened;

(c) regarding the discharge from liability of the board members and, where applicable, of the managing director;

8. Determination of fees for the board of directors and, where applicable, for the auditors;

9. Election of the board of directors and auditors; and

10. Other matters which rest upon the meeting according to the Swedish Companies Act or the company’s articles of association.

§ 12 CSD CLAUSE
The company’s shares shall be registered in a CSD (central securities depository) register in accordance with the Financial Instruments (Accounts) Act (1998:1479).

Articles of Association adopted at the general meeting held on March 7, 2016.

The auditor reviews the company’s annual report, interim report for the third quarter, and accounting, as well as the Board’s and the CEO’s administration.